PREVIOUSLY ON EXTRACTION
“You should have stayed at home.. Come let me take you back”I said as I tried to take a step but felt a sharp pain in my back..
My dad, Nissi and Brownie screamed..
I touched the spot.. I felt the steel of the knife buried in my back..
I pulled the knife out..
Before turning around furiously glaring at my brother..
“You shouldn’t have done that..”I glared at him..
“Fabian don’t!!”my father begged..
But I ignored his pleas as I stalked towards Jayden with the intention of stabbing him back…
“I’m surprised you do feel pain..”he said mockingly at me..
“You shouldn’t have done that”I repeated as I raised the knife to stab him but I heard Nissi’s screamed at me not to do it….
And I toss the knife away and landed my fist on his nose and i blacked out..

NISSI’S POV
I don’t remember falling asleep but I woke up to an empty bed..
The daylight brightness illuminated into the room, I could tell that it was another wonderful dawn of a new day..
I did my normal morning business in the bathroom before walking downstairs to join the rest of the family..
‘Did I just call Fabian’s family, family???’i asked myself
‘yes you did’i answered myself..

When I got downstairs, I found him sitting opposite his father and Jay’s father…
He was chatting with Jay’s Father and his father when his eyes caught mine.. He flashed me a bright encouraging smile and I reciprocated with a shy smile to him..

“Look who is finally up.. I gat this feeling you had a rough wild night”Pauline teased embracing me with a devious smile..
I pinched her gently and she whined slapping my hands..
“I overslept, so drop that crazy thought of yours”
“Hmm.. isn’t it strange that he became stronger this morning, he must have extracted strength from your luscious boobs”she teased..
“Pauline?? When did you become so naughty??”I chuckled as I feel myself blush..
“You’re blushing again.. But then you deny the fact that’s clearly stated on your face.. Your smile is a prove that something went down last night”
“Nothing of such nature happened.. I’m famished”I grumbled..
“Of course you need to be.. follow my lead”
And I chuckled as I trailed behind her..
I hungrily lavished my food to my satisfaction before Fabian graced us with his company..
“You’re looking better this morning”I whispered to Fabian..
“I deserve to look better, you slept beside me and I woke up next to you, in my own childhood bed..”he replied and I chuckled..
“Hope the pain has subsided??”
“Yes nurse.. Thank you for taking good care of me”
“I also took care of you, I deserve a big thank you”Pauline chipped in
“A big thank you Brownie”
“I’ll head down to the office since you’re better”I said
“There’s no need for that, Mr Brown called the office asking for an urgent leave for you and Anderson couldn’t refused him.. And I gave my approval”Fabian explained..
“WOW!! Thank you.. I’ll have enough bed rest today”I said happily..
“I hope so”Pauline chipped in..
“I know so..”I replied her
“Don’t be too confident”I heard Fabian murmuring to himself but I chose to ignore him..
“I’m heading back to my house, get your things let me drop you off first..”Fabian said and I rushed upstairs to grab my bag..

I decided to pay farewell to father before leaving..
I met his room door opened and he urshered me in
“I’m heading back to home father, I hope you’ll visit me before leaving the state”I said to Jay’s father..
“Of course child.. I can’t neglect the opportunity of tasting your food..”he pecked me
“Take care of yourself”he said and I nodded my head before walking out of his room..

I was close to the staircase when I saw Fabian’s father..
We’ve barely spoken to each other but I know his a great father..
“You’re leaving”he stated
“Yes sir..”
“Hope to see you some other time, the doors to this house are always open to you”
“I’ll keep that in mind.. You should also rest, don’t over stress yourself again”
“I won’t dear..”he replied and I hurried downstairs..
Fabian grabbed my bag from my hand as he led me to his car and drove away without uttering a word..

The ride back home was in silence, each of us glued to our thought..
I sighed as I saw the round about that leads to my estate but he took a u-turn..
“I thought you were gonna drop me off at my house!!” I murmured..
“I changed my mind”he answered hoarsely..
The sensation of his voice filled me, as I bite my lips..
I could feel his desire for me..
“You need me??”I asked even though I already knew the answer to the question.. I just wanted to hear it from his lips..
“I do!! I need you so badly..”he groaned..
“Won’t the stitches on your back reopen again??”I asked..
“I don’t think so.. And I don’t give a damn if it reopens..”he replied..
“I feel like I’m loosing you.. I can’t explain but I need sex to clear my mind”he said..
His confession rendering me speechless..

Suddenly a truck from opposite our direction hits us from behind, lifting the car into the air as I felt myself rolling, Fabian unbuckling his belt holding my hands..
“I’m sorry i couldn’t protect you”he whispered..
And we both stare out the window at the same time and I gasped out loudly panicking..
“Don’t panic please.. I’m here”he said but I could see the fear in his eyes.. Deep down in my heart, I had faith in him..
“I trust you.. We’ll survive together”I whispered..
“Good!!”he said unhooking my sit belt.. As I felt him wearing a parachute on me hastenly..
“Jump!!”he ordered opening the door..
And I jumped out with him jumping after me..
“We are saved”I said happily as I saw the car crashing below me..
“Yes!!”he coughed out blood..
As he slowly began to loose consciousness, holding on to me.
“Fabian!!”I cried out but he did not respond..
I tried landing but we crashed on a rock and I smashed my head on the rock…
I suddenly began to feel dizzy..

UNKNOWN POV
I rushed towards the rocky area of the cliff where I saw my target crashing unto..
I smiled to myself as I saw both of them lying weakly on the rock..
I cracked my gun marching towards them..
My phone began to ring..
“Hello boss”I said
“What’s the update??”my boss asked
“The truck ran over them as planned but I want to confirm that they are both dead” I said
“Good.. I kinda want Fabian alive for a while but I desperately wanna see Nisei’s corpse..”
I crossed check Fabian but couldn’t find a pulse, then I checked Nisei’s pulse it was low.
“Boss her pulse is low”I said
“Finish her off with your pistol”
“Yes boss”I replied and hung up..
Suddenly she opened her eyes weakly and I pointed my gun at her..
“Save him”she begged..
How can she ask me to save the man beside her when my gun is pointed at her..
“You can kill me but promise me you’ll save him”she pleaded holding unto my trouser..
“You must be mad.. Instead of pleading for your life your interceding for a dead man’s life”I blurted out..
She released her grib on my trouser as she crawled closer to Fabian rubbing his cheeks tapping him to wake up.. Weeping heavily..
Irritated by her attitude, I pulled the trigger aiming at her fore head.. 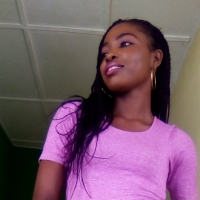 Grace Aghedo
This is one of our top story writers.
http://abfictionstories.com
graceaghedo6@gmail.com