It’s is a perfect day, the morning sun fully and, radiantly beaming with translucent clouds in the azure blue sky. A tennis court was located at block 3. 180 center Street, at the court stood two boys, Jimi and Derick.
Jimi with a grimaced face was ranting angrily at Derick. while Derick was trying all his best to calm his him down.
Jimi was average in height with well layered dark brown hair preened in a delicate manner. his eyes were cool blue in color. While Derick had a profuse amount of shaggy blond hair,
His eyes were vivid grey in color. He was also average in height but a bit taller than Jimi.
” Fuck off dude you are such a jerk ”
Jimi ranted at Derick “ anytime I see your face I feel like pukeing ”
Derick was really fed up, he has been trying to calm Jimi down for over thirty minutes now, but it wasnt helping.
“ you have been upset with me, since you came to join me here. I thought you wanted to play tennis, but you said no. come on buddy tell me whats wrong ? ”
“ you wanna know ? ” Jimi bellowed at Derick with sterning annoyance and, at the same time poking his finger hardly on dericks chest.
“ why did you tell my mom I have a girlfriend? ”
dericks mouth suddenly flew agape his eyes bulging out.
“ oh, that’s it , did she tell you I was the one that told her? ” Derick asked feebly
“ how could you ? you Know I have never had a girlfriend through out my whole life. you know my parents has warned me strictly not to have a girlfriend which has made me to develop a phobia of approaching a girl I love to tell her my feelings. I have managed to approach Ashley she has agreed to be my girlfriend. now you wanna screw it up. you Know my mom will be mad at me. if she finds out I now have a girlfriend, why did you tell her, huh ? ” Jimi asked with a red face.
Derick feeling chastised asked for forgiveness.
“ I am sorry dude, I couldn’t just lie to your mom. what if she finds out I am aware you have a girlfriend. she will be mad at me and, see me as a bad friend. am really sorry bro ”
“ oh sorry? You think sorry will change the fact that you betrayed me huh? ” jimi snapped.
“ so what should I do? Huh? I Sayed am sorry, I promise not to report you ever to your mom again. I swear ”
“ you swear? ”
“ yes I swear ”
“ swear with your life ”
“ jeez! man, come on, How do you expect me to swear with life? ”
“ you promised not to report my deeds to my mom again right? ”
“ oh well yes I did ”
”then go on, swear with your life and, prove yourself worthy of my trust. ”

Beads of sweat gathered on Dericks forehead. He hesitated with mouth agape and, hands akimbo. He stood still like a statue, for over one minute looking blankly into space.
“ are you just gonna keep on standing or swear? Come on am waiting ”
Jimi asked Derick who seemed to be lost in thought.
Derick heaved a sigh before speaking With a stuttering and quavering voice.
“ ok, I have made up my mind to swear to God that if I ever report you to your mom I shall di____ ”
“ come on dude, go on, finish it ”
Jimi urged Derick. But Derick did not respond. he just stood transfixed probably looking at something behind Jimi. “ what are you looking at? ” Jimi waved his hands over dericks eyes but he didn’t respond. Jimi resolved to turn around and see for himself what had kept Derick dumbfounded.
“ oh my___ God !” Jimi stuttered
“ jeez ! what the f-u-c-k in this world is that ? ” Jimi asked histerically pointing at a black round circle, forming slowing like a portal (vortex) right there in the tennis court. The circle had a very strong magnetic force that pulled anything close to it and swallowed it up. With a stuttering voice Derick managed to reply “ I don’t know buddy, but the only thing I can think of right now is, let’s get our asses outta here.”
As the two boys where still contemplating on what to do, The unbelievable happened. The two boys stood transfixed when they sighted the silhouette of a manly figure, with the physigue of a titan, emerging triumphantly from the fierce looking stygian circle. The man that came out of the circle, was Clothed in dark shiny armours. The two boys became very histeric, there spirits almost left them when they saw that the man was striding swiftly towards them.
“ oboy, we are in deep shit ” Jimi said with a shrilled voice “ what do we do ? ”
“ fuck you man what else are we supposed to do___ ? ” Derick yelled,
They looked at each other piering into each other’s eyes they yelled in unison “ Run !!! Ah!__ ”
They took too there heels running frantically from streets to street, bumping into people, following all the short cuts they knew. They jump and ducked through low fences, objects and passages yelling. “ ghost, ghost” they finally stopped. Panting heavily with short breaths they nervoursly roamed there eyes around examing the area .
Panting heavily Jimi manage to speak up
“ I think we’ve lost him ”
“ l pray__ so___ ” Derick replied with staggering breaths, As they were still gasping for breath. A voice from behind interrupted them.
“ are you sure you guys have really lost him. tsk, tsk, tsk I don’t think so ”
The two friends slowly looked at each other. Gulped there spit down there throat loudly then slowly turn around to see who it was that replied them. Lo and behold when they turned around it was the guy in black armour. 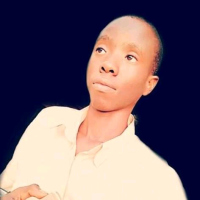